I had one mission in 2016 and it was to add as much variety to my pictures as I could. As I was planning before the season started, I knew that I would have to pass up some safe easy pictures to try things that might not work. In politics, there’s a saying “don’t let the perfect be the enemy of the good.” This means that you need to accept a good compromise over risking everything by holding out for a perfect outcome. In photography I think good pictures are the enemy of great pictures. I don’t think it possible to make great pictures without taking an angle or setting up your camera or using gear that wouldn’t work for a normal picture but would take advantage of a great background, or a ray of light, or action that comes much closer to you than normal. 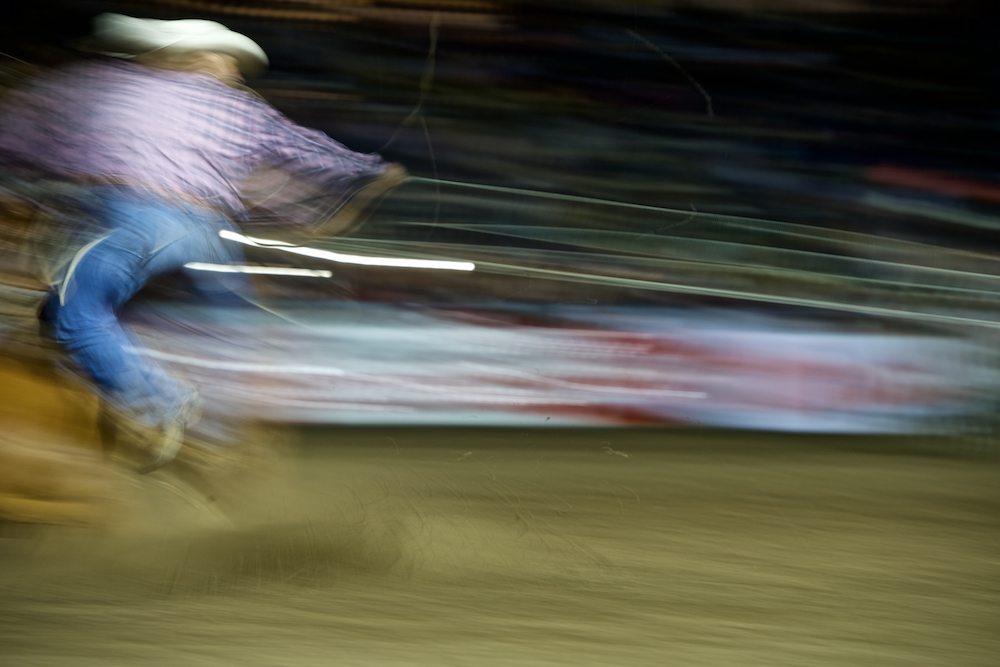 Tie-down roping is generally shot head-on. The jump off the horse is easy to get this way and fairly dramatic (if you don’t look at many rodeo pictures.) But shooting head-on means being 40-60 yards away. I like to be much closer, so I shoot a lot from the side. For this, I was about 15 yards away, shooting at 1/6 of a second. Many things could have gone wrong, like the calf going to the rider’s left, or a bumpier get-off that would have taken the motion out the direction I was panning. In the end, it’s about as abstract as possible while still being recognizable as a tie-down picture. 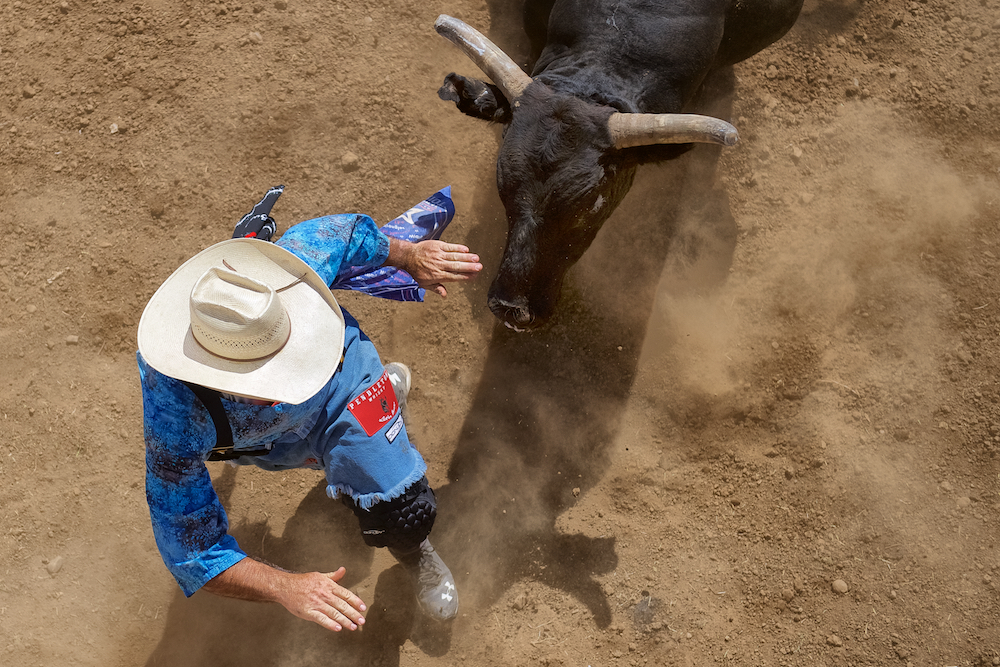 There aren’t many places where you can shoot rodeo from overhead, and it’s also not especially useful except for bull riding where the action mostly occurs in a small area next to the chutes. This year I shot almost all of the bull riding at St Paul from the announcer’s stand, and ended up with a totally unique picture of a bull chasing a bullfighter. 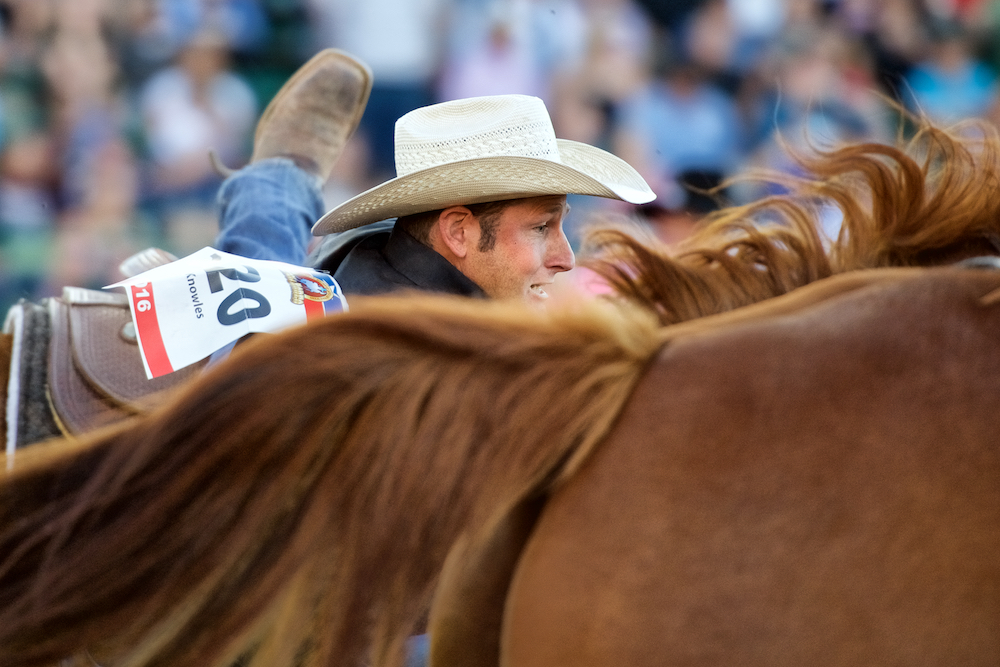 Steer wrestling is almost never shot from this side because the haze horse and rider block the cowboy who is jumping off to bring down the steer. Here I managed to solve for the angle that exposed the cowboy’s face and time it just before he dropped out of sight. 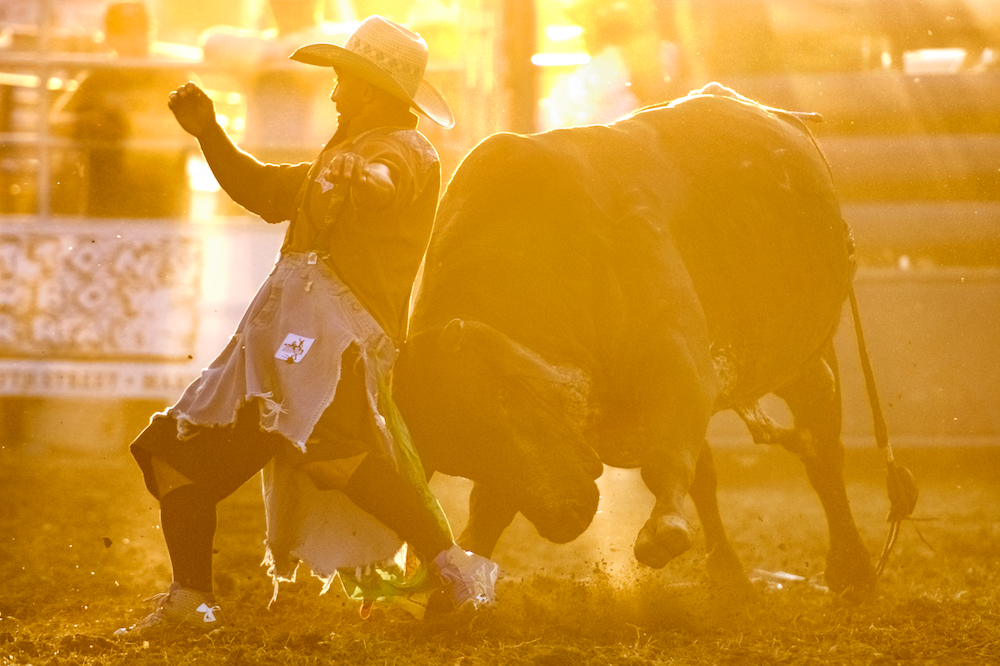 It’s rare that I get to shoot in light like this, so I try to take advantage of it. In this picture, the angle worked out in a way that caused the lens to flare in a way that lens tests would consider failure. It was a close call for the bullfighter, illustrated by the thin ray of light between him and the bull. 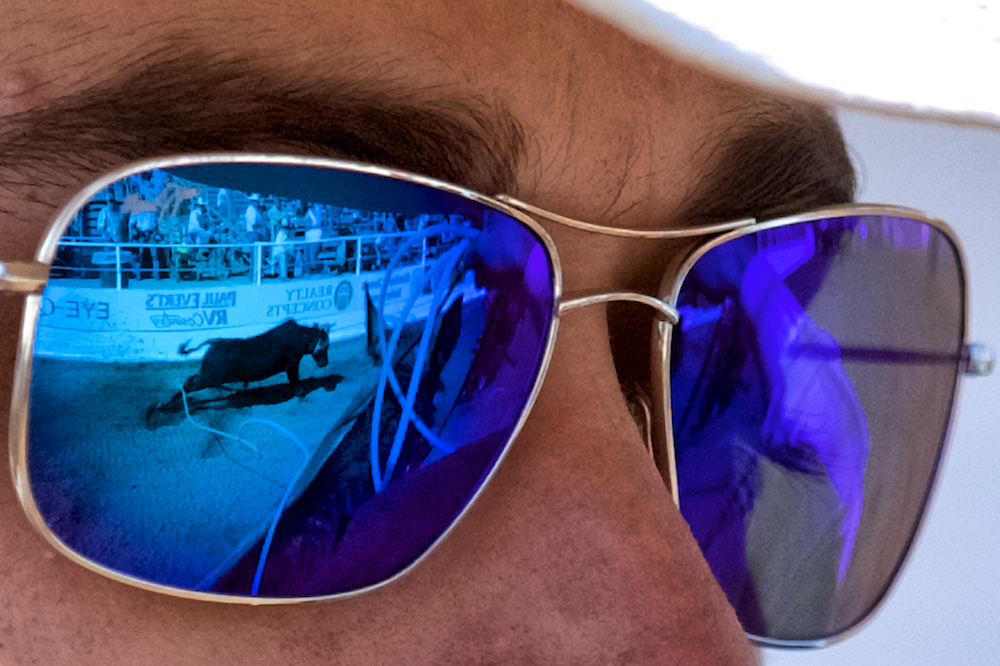 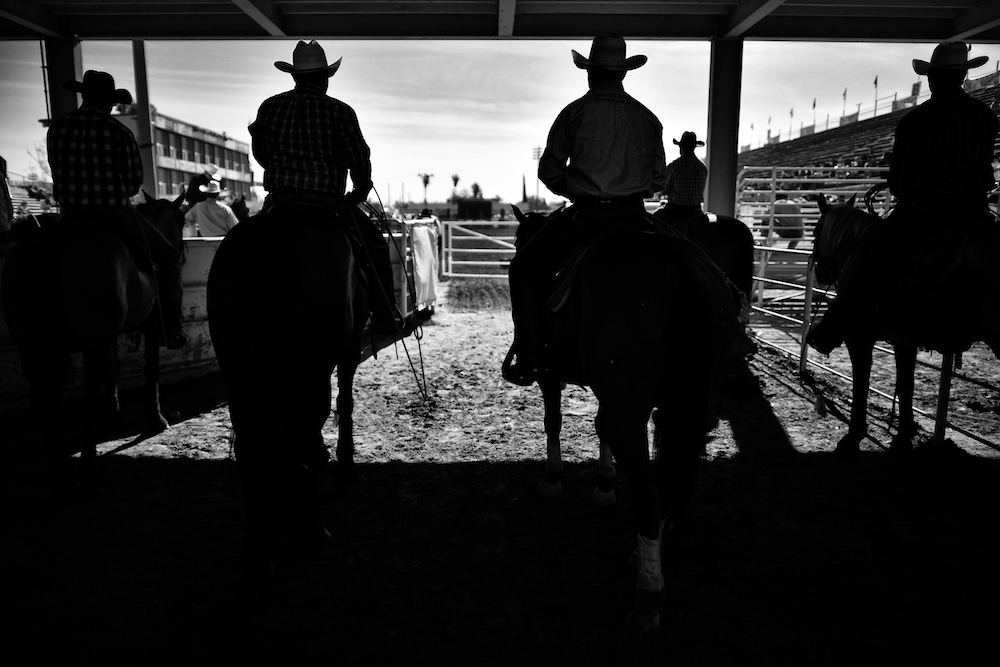 Sometimes you have to leave the action and go looking for other pictures while it is happening. These cowboys waiting for their turns lined up just right, and shooting at f1.4 blurred out the background just enough. 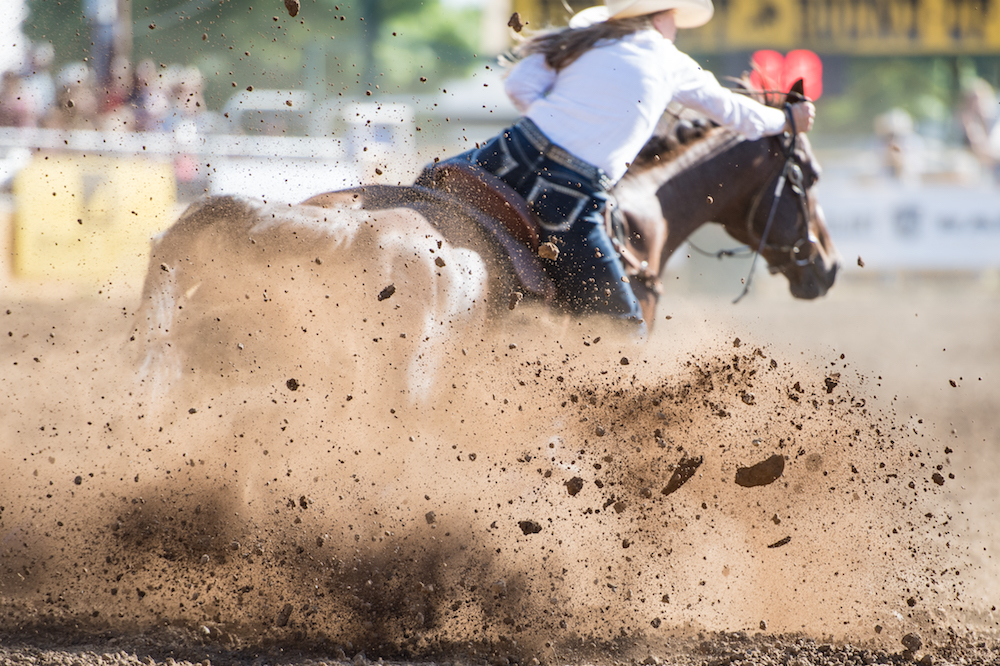 Barrel racing is about horsepower, and this often means muscles flexing as the horse turns the barrel. Shooting horses from behind can be boring, but accentuating the dirt flying is another way to convey this power. 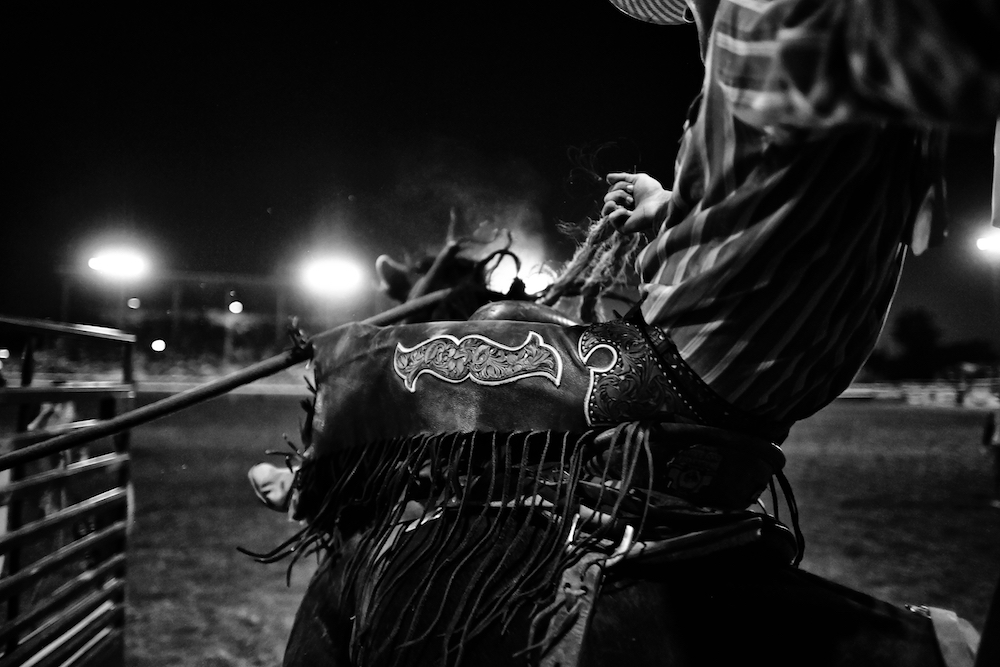 Behind the chutes at a rodeo is barely-controlled chaos. It’s difficult to get close because there are judges and other cowboys crowding a small area. The horses take off and are quickly out of range of the wide angle lens. This time, I had enough time to get a picture featuring the rider’s chaps and his hand on the bronc rein. 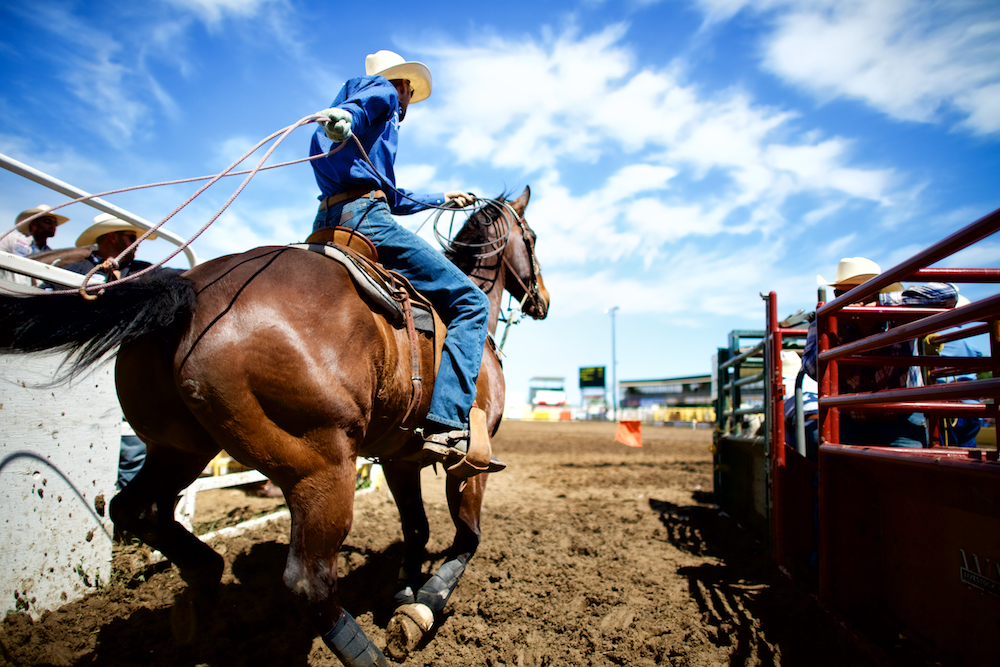 In rodeo, when the light is directly overhead, you fight exposure problems a hats get blown out and faces fall into shadow. I like to change the situation by finding angles that minimize this. With a nice blue sky and puffy white clouds, half the work was already done. All that was left was to time the rope behind the cowboy. 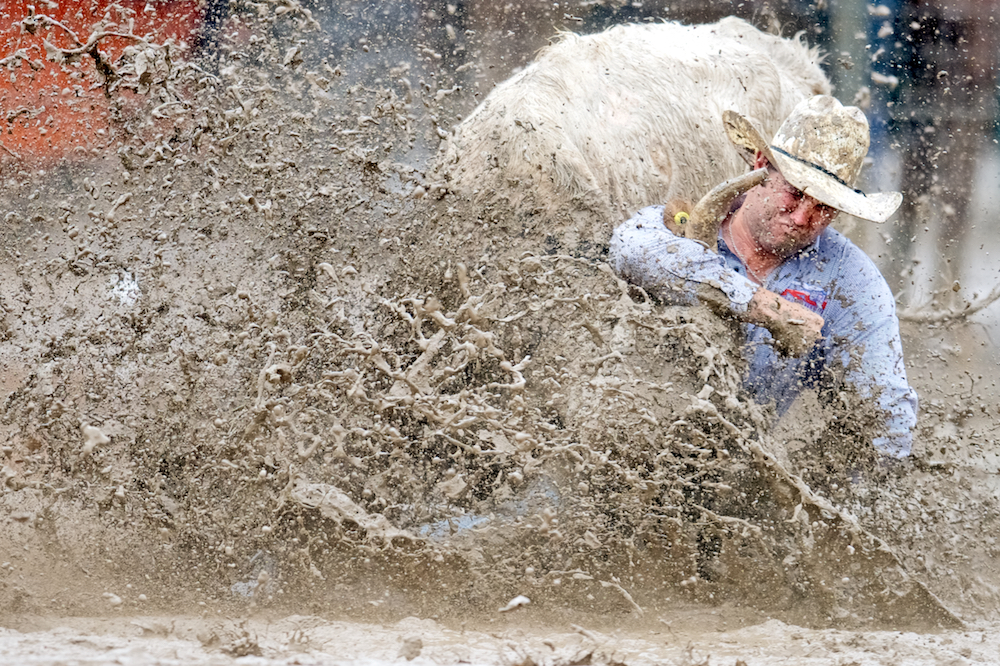 Autofocus does not like mud, especially this much, so I moved closer so that less mud would be spraying over the cowboys’ faces relative to the angle and timing of the slides. There were lots of crazy wrecks but not too many runs where the cowboy had perfect form and the mud cooperated.