As Ryu and I check out the work of people in the Flickr group we often see long series of pictures from the same play. Yes, modern cameras can do 9-11 frames per second, and that’s fine – except for Ryu who shoots some kind of film no one’s ever heard of. But it’s good to keep in mind two things: 1) what does high frame rate shooting get you? and 2) how (and why) do you edit down all those pictures?

There are times when shooting at 9fps is pointless at best, counter productive at worst. I’ve used the example of a baseball pitcher’s motion: if you want the ball just coming out of his hand or the perfect follow through picture, you’re much better off using single shot mode and working on the timing between when your brain says “shoot” and when the action is where you want it. The same goes for the horse’s kick in rodeo, it’s just too fast for 9fps, and if you lay on the shutter, you’ll most likely not get the fully extended kick that the hacks have spent 20 years “perfecting”.

There are other times when it pays to have a bunch of pictures of something to give your clients/editors maximum choice. In 2013 I was shooting the Rancho Mission Viejo Rodeo in southern California, and there was a matchup between the reigning world champion saddle bronc rider Jesse Wright and Hat Stomper, a many-time selection to the National Finals Rodeo owned by friends of mine. Since this was before I was allowed on the arena dirt, my only option was to shoot from about 60 yards opposite the bucking chutes with the action coming toward me. I knew that there was a good chance that the horse would blow up in the chute, but also that the pictures would get better as they got closer to me due to separation from the background via the depth-of-field qualities of shooting a 400mm 2.8 lens.

Below is the series, minus a few intermediate pictures that were too similar to include. I’ll do a mini Training Ground on myself to demonstrate which ones were used and which ones weren’t.

The first two pictures are of the blow up in the chute. Each has pluses and minuses, with the minuses winning. Again, there’s no separation between the subject and the background due to the 60 yards from camera to subject and 1 yard from subject to background. In the first picture, you can see the rider’s face fairly well, but in the second, the horse is significantly higher off the ground. Neither of these is a throwaway per se, but they’re also not my best, especially a season of dirt access (with the choice of angles and far shorter distances) later. 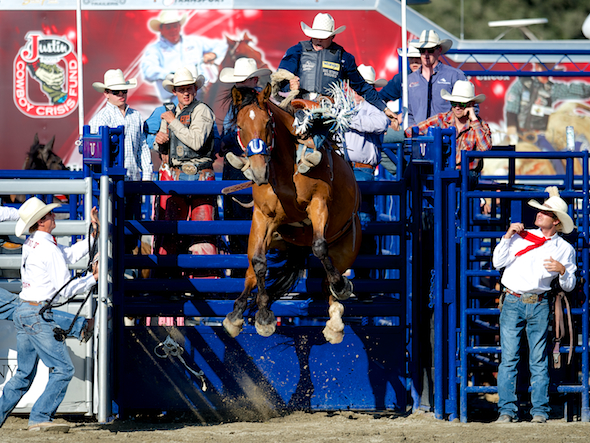 Generally once a quality bucking horse clears the chute gate, its first few jumps will be the best before fatigue sets in and the amplitude/extension decreases through the finish. NFR bucking horses like Hat Stomper have a little bit extra and will most times buck very hard through the eight seconds. On this ride, every jump was right at me, so it was impossible to really show the kick. If you look closely, you can see when the rear hooves are even with the fronts and when they are higher in a kick. Trying to time these jumps was pointless since the kick is only implied anyway. Of pictures 3-6, 4 is the best combination between the kick of the horse, face and feet placement of the rider, and depth-of-field. But even that picture could have been better if either it had been closer to me or at enough of an angle to show the horse’s extension during the jump. 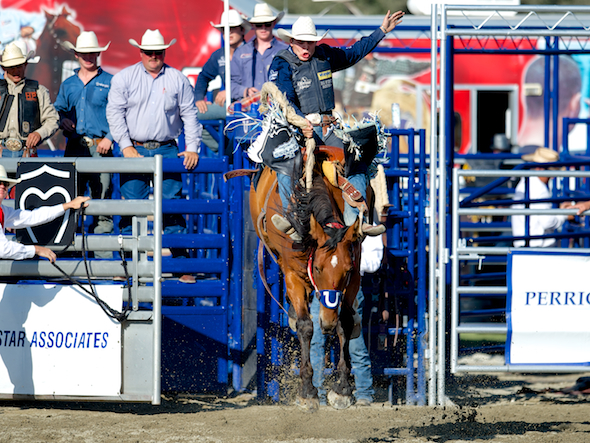 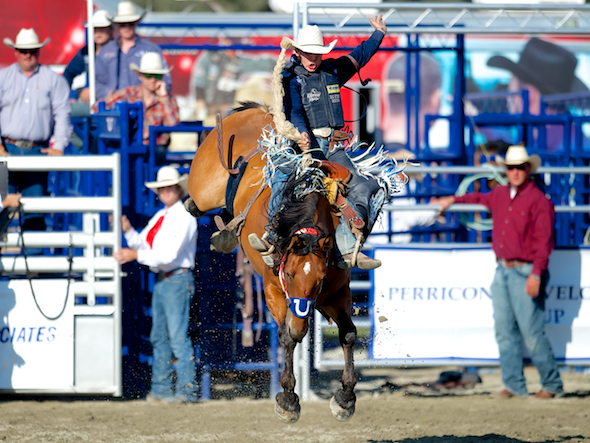 Now here’s where it gets interesting. It’s not every day that you see the world champion get bucked off like this, so the subject matter is working for me. They are also much farther down the arena, providing me with more detail (horse’s mane, the strands of the braided reign, the fringe of the chaps etc) plus much more separation from the background that helps isolate the action. So how to choose?

I like 7 a lot, and if this was the only one I got, I’d probably have been satisfied. The horse is in a very powerful position, pushing off of its rear legs and delivering enough force to throw the rider, whose foot is just starting to come out of the left stirrup. Not bad. 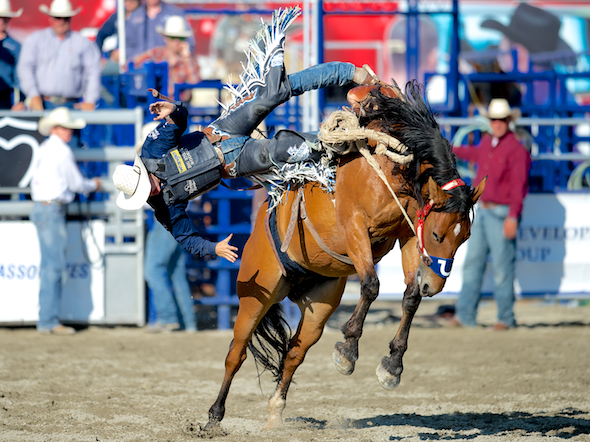 8 has a little less impact because the horse has already delivered all of its force, and the energy has been sucked out of the picture due to the positioning of both rider and horse. 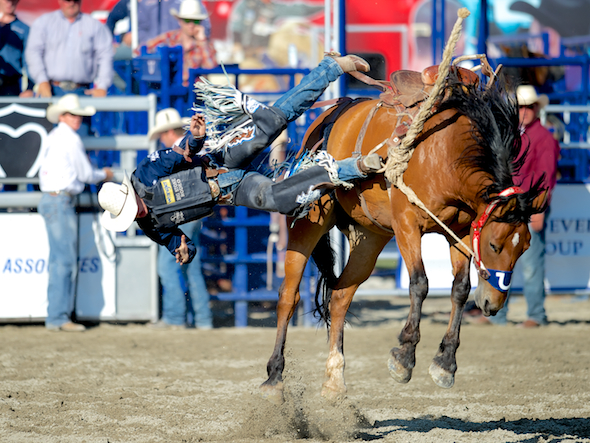 Now here’s the one. In 9, the horse is balled up again, getting ready to kick, which has sent the mane flying. The rider has turned a bit toward the camera so you can see his face better than the previous pictures. He is now completely disengaged from the horse and trying to figure out how to land without breaking anything. As a total bonus, he left his boot behind in the right stirrup, and you can clearly see his his white sock. This isn’t super-rare, but it doesn’t happen every day, and it provides the last bit of detail to push this picture over the top. 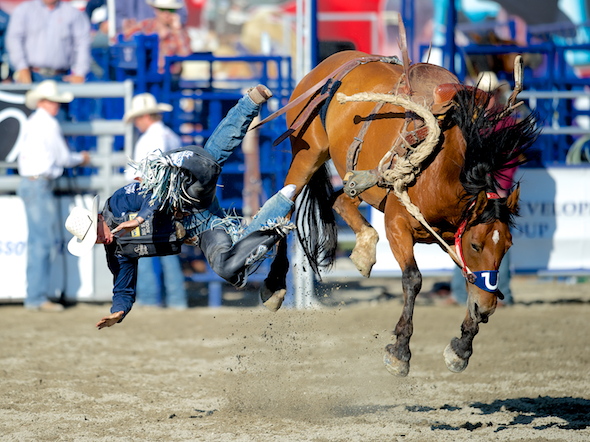 10 has the horse still bucking hard, in fact this is probably the one in the series where you can see the kick most clearly. But since both horse and rider are so close to the ground and farther away from each other, again, the impact is sucked out of the picture. 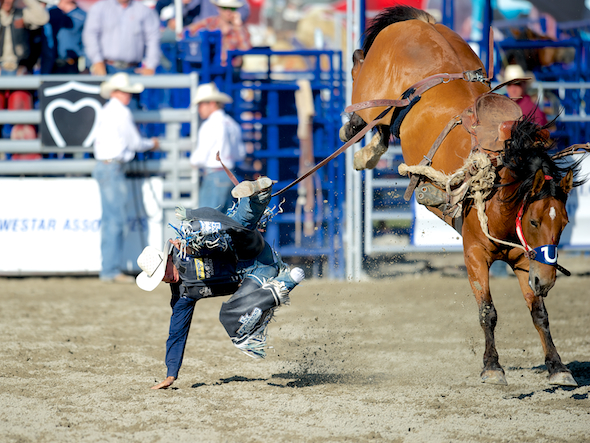 After 10, the autofocus went out because there was too much space between horse and rider and the focus went all the way to the chute gates.

So what did we learn? Well, there’s more to it than having the right lens/exposure/focus; things beyond your control (position and orientation of your subjects) almost always will influence your pictures. Even when crazy things happen, not every picture will show it the best. When you edit down to what works the best, there will always be more impact than if you try to divide your viewers’ attention between 10 pictures in a series.

Picture 9 was blown up to 10’x10′ and wrapped on the back of a trailer that travels tens of thousands of miles per season. All of the others only exist here and in my archive. This is exactly as it should be.