I spent a lot of time at the beginning of 2014 thinking about my rodeo work and how I would take advantage of finally getting my PRCA card, and with it the ability to shoot from the arena dirt. I looked at lots of old pictures that showed kamikaze photographers with wide lenses, seemingly under the bucking horses and bulls they were shooting. This, in stark contrast to the rodeo “photographers” of today, sitting on their stools and Pelican cases 40 yards away.

So at my first rodeo of the year I switched my 400 out for a 70-200 and set up around the bucking chutes. The second bull of the day, after throwing off his rider decided to charge me. This was almost the last picture I ever made: 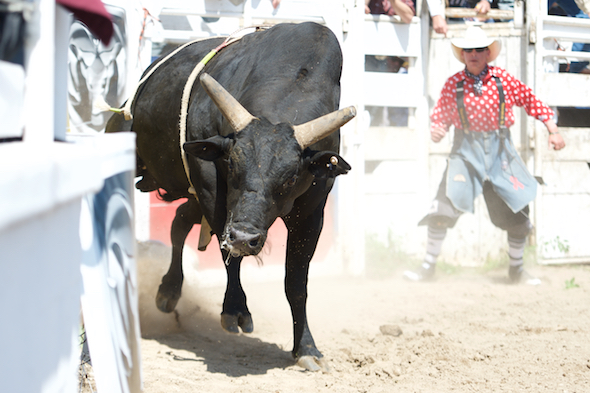 Obviously this is not one of my top 10 pictures of the year, but it is a very visceral depiction of a moment that made me reconsider the whole year’s plan. I ended up making it to the wall, turning sideways just in time to feel his horn on the back of my shirt. The adrenaline rush was quite something, and after shooting the remaining bulls from the other side of the fence, I got back in there…

…for the bronc riding. Horses are different than bulls in that they will usually avoid running into people if they have a choice, whereas most bulls will go out of their way light you up. So when Snake Oil carried Cole Neeley towards me, I had some extra time to decide to keep shooting or bail. As they got closer, I could see that I wasn’t going to get hit, so I was able to get this picture, from less than 10 feet. This picture is basically everything that current rodeo photography is not:

One of the things I absolutely love about rodeo is 7am slack. Timed events in rodeo generally have too many contestants to get through while the fans are there, so they run many of them before the performances. Some start at mid-day, but some start very early, and slack at Clovis is at 7am. Provided they start on time, you get a hour of beautiful light that comes in very low against the chutes. This is light you can use in a variety of ways, and here I shot across the arena, and as Seth Brockman brought down his steer, the light hits him and the dirt in the air: 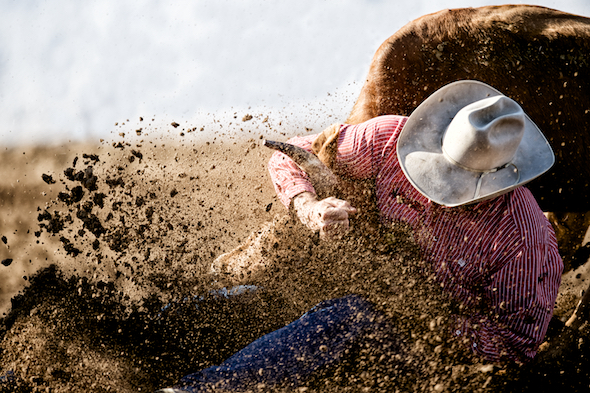 Panning during barrel racing, while not the easiest thing in the world, is not that hard. You can usually get the timing down pretty quickly for each arena, and the horses do more or less the same thing. But panning for roping events is much harder because the horse has to follow the calf/steer which is much less predictable. In addition, they are accelerating from a stop, so there is much more up and down movement in addition to the side to side movement. Here I managed to get down to 1/40th for a nicely blurred background, but I still have Riley Pruitt’s face and hat frozen:

Many people can’t believe that I would choose to shoot a rodeo over an NFL/MLB game every time. One of the reasons is the access. This is a picture of 2013 World Champion tie-down roper Shane Hanchey tying a calf, made in Colorado Springs last summer. I’m shooting at 14mm, close enough that his rope was bouncing off of my lens each time. I got sprayed with dirt and calf turds the whole time, but it’s a deal I’d make any day to get pictures like this:

Again, the next two pictures take advantage of access to get as close as possible. A bull rider gets some help from another competitor pulling his rope. I’m inches away, showing all the detail possible of a scene that fans rarely get to see:

Trying to have a conversation and shooting at the same time don’t often mix, but here I got lucky by massively underexposing this picture of team roper Derrick Begay working his saddle into place:

This is one of my favorite roping pictures because you have the intensity on Jim Ross Cooper’s face, the coil in one hand, and the rope going around the saddle horn for a dally. I don’t think you need to know anything about roping to understand this picture:

I tried to go easy on the wreck pictures, but still ended up with three of them on this list.

I don’t think this one of Steve Woolsey needs any explanation: 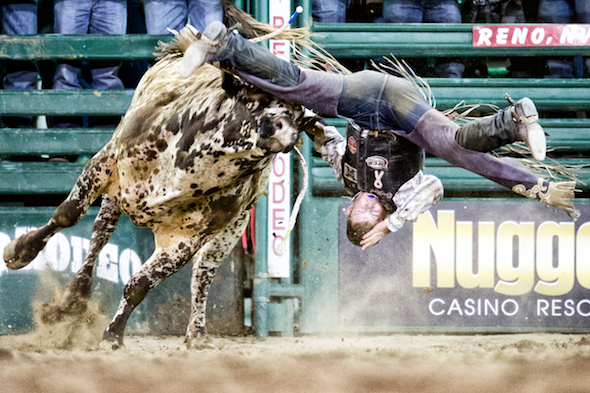 Every once in a while, a bull will take out the barrel with the barrelman in it. Both times I have seen this, the barrelman was Mark Swingler, and both times resulted in great pictures. This is why you need to be ready to keep shooting even after the ride (or play) is over:

Rounding out my top 10 is the picture that generated the most attention/chaos. Generally barrel racers don’t get bucked off their horses. These are well-trained speed horses, not the same kind that buck in the roughstock events. The barrel pattern at Livermore comes pretty close to the fence, so I was very close shooting my 85mm 1.4 when I saw this horse losing it and dumping its rider right in front of me. This picture (along with the others in this sequence) got me kicked out of the rodeo after the “cowgirl” complained, caused a sensation on social media via the #NoCryBabyBuckoffs hashtag, crashed my website, was mentioned on the radio by 3x world champion Tuf Cooper, and sold a ton of my books. It was surreal to say the least. 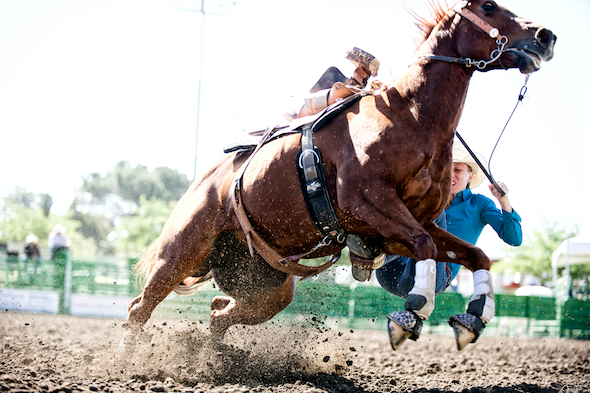 My rodeo assignments kept me busier than normal in 2014, and I shot fewer non-rodeo events than ever before. I tried to make as many non-action pictures as I could, and here are a couple of those:

I have been trying to use the liquid nitrogen fog to do different things since I started shooting Cal football. Shooting the players running out onto the field before the games provides several chances per season, but for safety reasons (100+ football players sprinting into a low visibility situation) the positions are severely limited. For this game, I set up low behind the goalpost support to work in a lot of the fog plus the blue sky and the top of the stadium. Milliseconds later, a video guy and his cable puller came crashing down in front of me…they stepped out a little too far and were trampled by a few players. 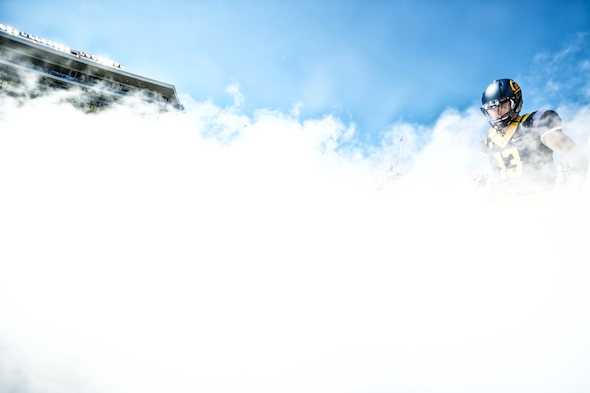 I shot a lot more postseason baseball than I had planned on (or wanted), but the start times of some of the games meant that batting practice took place in some interesting light. This picture of Pablo Sandoval wiping sweat off of his face took advantage of that light. But since Sandoval left via free agency, it’s also obsolete.

If you want to see more, you can check out my Best of 2014 slideshow here.