First of all, I’m really sorry about people not receiving my pinkest book ever “No Hands”. For some reason (I do have my suspicions), the delivery is taking a very long time.  I really apologize for it.  Most of Europe has received it and hopefully the goodness will reach out across the pond to the Americas and across Siberia to Asia.

Second, blog posts.  I must admit that from my end, there isn’t much more to write about in terms of sports photography.  Don’t get me wrong.  We have enough topic to discuss about it on the podcast, but perhaps not write about it to the extent we have been writing all these years.  That doesn’t mean we won’t have anymore blog posts, but most likely only for special occasions.

Which brings us to the third and final point which is the top 10 of 2014.  I thought about it and looked at my results from last year.  All I can say is, “Well, I tried”.  Trying isn’t good enough.  Matt and I said that if effort added value to the quality of your photo, more people would have graduated from BLFS long time ago.  But alas that is not the world we live in.  My work from 2014 reflects just that.  I tried, but I didn’t succeed in some cases.  Sad, but that is the reality of sports photography.  You have to fail first to at least get a chance to create something unique and great in the future.  I hope to redeem myself in 2015 with what I’ve learned in 2014.

Chess Boxing
It was my first attempt at shooting chess boxing and as you can see from the result, it’s a step in the right direction, but there is much work to be done.  The point here is to shoot chess boxing and not to shoot boxing.  When it comes to a sport which isn’t a major sport (yes, football counts as one), your photos need to who what it is all about.  Maybe not all of it, but at least a glimpse of it.   To include an element of chess into every single boxing image was not an easy one, but in the end I sort of kind of got it.  But I feel as though this is a sport that I will revisit more in the future as I don’t think I have exhausted all the shooting possibilities. 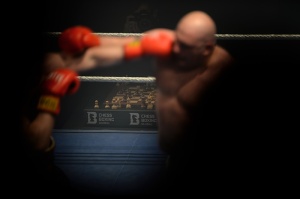 PSG v Barcelona
Lomography lent me a Petzval lens and I used it.  I HATE manual focus and I LOVE auto focus.  I have no idea how my predecessors faired without auto focus.  I really don’t. I digress.  I used one of the aperture blades that had stars on it as that gave it the starry feeling.  The bokeh on this one is interesting, but every condition has to be met for you to achieve one.  I’m always looking out for an interesting lens, so let me know if you know any.

Standard v Panathinaikos
I’m going to keep on losing my Greek fan base as I continue to complain about how to spell Pantahanaikos.  Or Panthanaiakos or whatever.  Anyway, I went to this match for an assignment and came away with an image I was fairly happy with.  Since I’m not a good action photographer (really, I’m not), I rarely pay attention to the action scenes.  Nor do I put much effort into taking one.  But this one I got lucky as I was shooting the goalie and I was equally lucky he jumped the way he did. 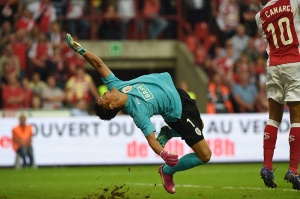 Germany v Ghana
Yes, the world cup.  I am finally starting to miss my adventures there because before it was nothing but one month of continuous “No, not another match…”.  But I do want to talk about the fact that this light business is something I really got into last year.  Due to our shit long winter, most football in Europe is played in perpetual darkness with flood lights.  Seldom do we get to play with lights.  But fortunately, most of the world cup happened during the day and that gave me an excuse to do what I wanted to do with lights.  I had no idea Lahm would call it an international career after 2014, but I got the El Capitain in this light.  Just so you know, if you want to get an image like this, you’ll need to make sure that the ray of light is only hitting that particular area and that you underexpose it to a point that everything else fades to black.

Chelsea v PSG
I have obsessions.  Thank god it hasn’t led me to any jail time.  Yet.  Mourinho is one of my obsessions and I’m glad I got this image, because to me he’s a well coiffed man with a notepad and a pen.  Always.

Bayern Munich v Hoffenheim
Or anything multiple exposure.  I still haven’t figured out a great way to use this technique, but it’s kind of going somewhere.  Where exactly I don’t know, but it’s going somewhere interesting.

Holland v Costa Rica
Penalty shootouts are very rare during a normal football season.  I was overjoyed and overrun with emotions as I got to shoot more than enough extra time matches to last me until the next world cup.  I basically shot 2 extra matches when combining all the extra time.  Honestly, WTF.  There are many ways to shoot penalties and the most interesting bit is at the end.  Because, you know, someone wins and someone loses.  I decided to blur this one as the orange was strong enough to show the jubilation against the disappointed Costa Ricans sitting still and miserable. 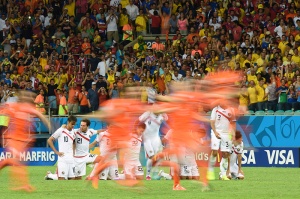 Baseball in Curacao
If you must know, I’m typing all this with my newly born daughter stretched over each of my wrists as she dreams of Ronaldo and some Hollywood actor who’s hot for being hot.  No, she’s never going to have a boyfriend or a girlfriend. New father obsessions aside, my annual trip to the baseball nations in the Caribbean took me to Curacao last year.  It was fun.  It always is.  And very educational.  And hot.  Will keep it rolling in 2015 as well.  This year? Somewhere I’ve been dying to go for a long time… 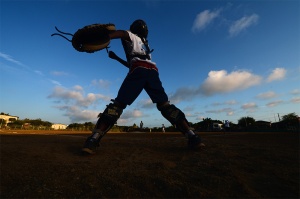 Sassuolo v Milan
Lights lights lights.  Someone once told me that the general rule of thumb for photography is to shoot into the light and not away from it.  I agree.  Backlit lights are always beautiful.  I also think Japanese football is going down the drain.   This image and others on this top 10 are good examples of images that will not be used in most publications. But they will get you noticed.  Why?  Because they are different.   It’s a bit of a catch 22.  If you want to break into this business, you have to shoot in a horrendously boring fashion.  But then you will not get noticed because you and the other 1 pillion other sports photographers have shot the exact same image.  My advice?  Always be different.  Even if it won’t get you that first job, it will give you a better chance of landing a much much better job that is not your first job.  So maybe a second or a third one.

Manchester City v Barcelona
The dark side of Messi. If I ever become the official photographer of said wee man, I would like to shoot him as a villain.  I think he has more villainous quality than a superhero one.  Yes, that’s a compliment because my favourite Star Wars character is Darth Vader.  Here I played with the light again and underexposed it to the point that you can’t see his face anymore.  Dark Messi. 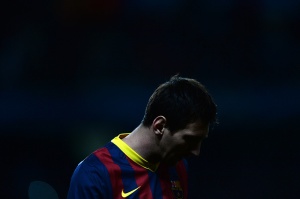 Arsenal v Spurs
Details.  The more details you can capture in a scene, the more it will draw you into the image.  The smallest of details, when captured interestingly, will forever be more interesting than a goal scoring scene.  Trust me.  Here, I saw a bird and I wanted the bird.  But not just the bird, but a bird with someone in the background.  Remember, you always need at least 2 interesting things in your image for it to be actually interesting. 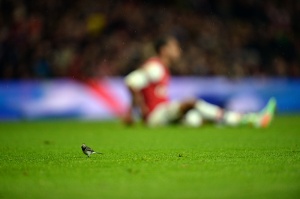 Somewhere in Rio
One of my favourite images from the world cup in Brazil.  I think my goal from this world cup was to capture the everyday football life of a Brazilian.  And I believe this one did the job.  My only regret is that I didn’t get to shoot enough everyday stuff in Brazil.  There were matches I shot which I can now safely admit that it wasn’t worth my time, but they had to be shot because I was there to shoot matches.  Sigh.  For future world cups, I might shoot less matches and concentrate more on the everyday football people.  Good god I miss Brazil.

Aerochrome
I think I didn’t quite master it.  I like the image here, but it feels like it’s a work in progress.  I went to Brazil with about 15 rolls of Aerochrome and I only shot 8 of them. Not good.  I should have shot more.  But for some reason I didn’t.  Part of me wanted to play it safe and part of me thought I needed to conserve the film for future use in the tournament.  If I was only shooting film in Brazil, I wouldn’t have had this problem, but when you mix 2 mediums, you tend to favor
one over the other. 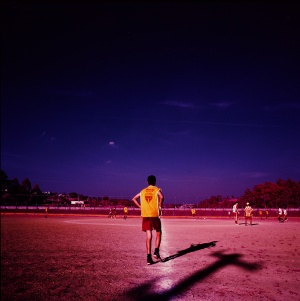 That’s it.  It’s definitely more than 10, but hey, it’s 2015.  I have no idea what the meant, but here’s to all the BLFS people for their continued support and further advancement in your sports photography skills.