BLFS listener Andrew Carlin wrote in and asked if I would discuss how I shoot hockey and suggest ways to shoot it in less well lit arenas. We like requests, so I’m going to address Andrew’s questions here. Feel free to write in if you have similar questions or topic suggestions for either the blog or the podcast.

Of course the main obstacle to shooting hockey at any level (the glass) is the same thing that allows spectators and photographers to leave at the end of the game without needing the kind of plastic surgery the players sometimes do. So in the likely event that your name isn’t David Klutho, your options are shoot through a hole in the glass, shoot from above with a long lens, or shoot through the glass itself.

The only hockey I shoot is at HP Pavilion, home of the San Jose Sharks. There are five 6″ holes in the glass just above the boards at various intervals around the ice. Since there are generally 7-10 photographers at any given game, this means my shooting time is split between shooting 24-70/70-200mm through one of the holes1 and 400mm from the second level2. I’ve never shot through the glass3, but people who do generally use one of these to control reflections.

1Shooting through the boards gets you closer to the action, but is limiting in many ways. Photo holes generally face across the ice because facing down ice would make them targets for errant slapshots. So sitting at a hole means that you’re writing off action that takes place from the red line to the other end because of the distance and the fact that you won’t be able to get an angle. You’re also at about waist-height which isn’t an interesting angle. Still, it’s great for face-offs, battles for the puck, dramatic saves, and scrums in the crease. You might also get lucky and catch a fight. 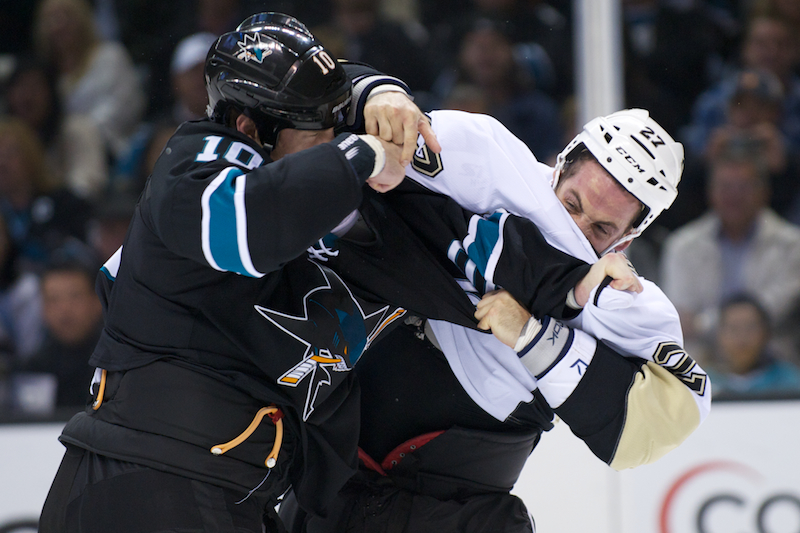 2 Shooting from the stands with a long lens means more pictures, but you have to work a bit harder to make them look interesting and not like they were taken by a fan. You’re also limited by the netting behind each goal, which means shooting from the side, which takes the near boards out of the equation. If you’re patient, you can catch slapshots, breakaways, flying ice chips, and again fights. 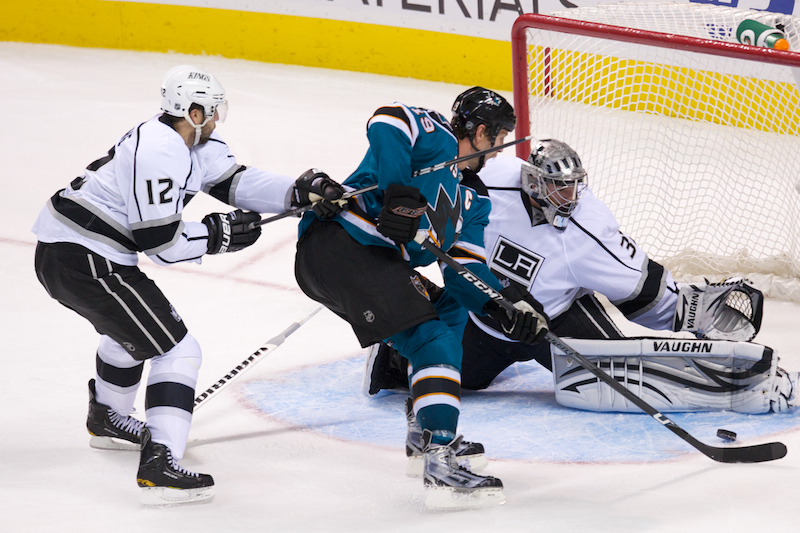 3 I am intrigued with the idea of using a Lens Skirt and shooting from one of the corners, looking for players coming right at me, but I haven’t figured out how to make it work at HP Pavilion yet.

Beyond shooting positions, obviously lighting is a concern. HP is lit for TV so it’s not something I worry about, but I have been a spectator at high school games where the lighting was barely sufficient to see the players. As with everything else, but even more important with hockey because of the ice and white boards, getting the exposure and white balance right is critical. I take a custom WB reading and adjust my exposure at each new position to make sure I’m where I need to be. Keep in mind that you want to expose for the players faces, and that the white mass of ice and boards in the fore/background will fool the camera’s meter every time, so be careful to set it to get the skin right and let the ice be a bit overexposed. If your arena is poorly lit, my advice is the same as it always is: do what you can because you can’t fight physics. If one small part of the ice is better lit than the rest, shoot there. If you can get overhead, shoot with the lights and catch some of the reflected light. Or you can be Dave Black.

Once you have figured out your settings and shooting position, you have to figure out how to shoot the game. With so many players in so small a space, there will always be someone skating in front of your subject, so you have to be patient and find the little gaps when you have a clear view. Remember that hockey is a collision sport, and whether it’s against the boards or on open ice, players will crash into each other, and every time this happens, sweat and ice will fly, strange faces will be made, and other interesting things could happen. If you’re sitting across from the benches remember that scoring in hockey is rare enough that players on the bench usually jump up for goals, and pictures of a bunch of players celebrating are there for the making.

There’s also the decision you need to make when you’re tracking a player attacking the goal. Do you stick with him for the shot knowing that you might only get his back, or do you pivot to the goal and try to either get the save or the puck going into the goal? If you’re shooting from above, do you follow the player with the puck, or the star player skating to free ice? These are all choices you need to make for yourself, but with practice your coordination will start allowing you to get the pictures you want.

Hopefully this answers Andrew’s questions, and was of some use to our other readers/listeners who shoot hockey. If not, please follow up in the comments, and I will do my best to answer. And again, feel free to send in topics you want us to cover, we’re all ears.