That’s my name. You know why, mister? You drove a Hyundai to get here. I drove an eighty-thousand dollar BMW. THAT’S my name. And your name is you’re wanting. You can’t play in the man’s game, you can’t close them – go home and tell your wife your troubles. Because only one thing counts in this life: Get them to sign on the line which is dotted. You hear me? A-B-C. A-Always, B-Be, C-Closing. Always be closing. ALWAYS BE CLOSING. – Glengarry Glen Ross (1992)

Picture me as Alec Baldwin (minus the BMW) screaming at you to ALWAYS BE EDITING. I’m not talking about cropping, toning, sharpening, or any other post processing, just where you put the line between the pictures you show others and the ones you don’t. It may not be as important to photographers as selling is to salesmen, but editing is a close second to actually making pictures. In this post, we’re going to take a look at getting more out of each shoot by editing in-camera, and then ruthlessly editing after the shoot to make sure that your final product reflects as well on you as possible.

Using your camera’s LCD to review pictures is looked down upon in many circles. That the act was named “chimping” certainly didn’t help, but make no mistake, professional sports photographers use their LCDs. With the caveat that it’s critical to avoid jumping on the screen after a big play and missing the reaction, using the LCD can be a big help to refining your plan to get a complete take on your shoot. In last month’s Training Ground we critiqued a racing picture where the photographer was trying to make a picture out of a tiny detail, and it reminded me of the first time I shot NASCAR. A friend who had shot the race at the same track told me to make sure I got some pictures of a certain turn where the cars cut over a curb and briefly go up on two wheels. Somehow I ended up spending a whole 90 minute practice session shooting the same turn, varying only the fence cut I was using to get a very slightly different angle. I didn’t look at the LCD (the cars were coming by constantly and I shot every one) and when I got back to the media center, I realized that I had about 400 copies of more-or-less the same boring-ass picture.

Had I been editing in-camera, I would have realized that 1) it really wasn’t a very interesting picture, and 2) I didn’t need any more than one picture of each car from that spot, especially when there was so much more going on at different places on the track, including – most frustratingly – a better version of the picture I was trying to get in the very next turn. Too bad I had to wait until the next race to get it:

So you can figure out what you’re doing after you’re done for the day, or you can do it during the shoot. Doing it during the shoot means that you can get certain pictures out of the way, stop chasing pictures that aren’t going to work, and move on to more creative possibilities.

You can shoot 1000 frames at a football game, 960 of them awful, but if you only show the 40 winners, it will look like you had a great game. This, of course, isn’t ideal because you’re spending a lot of time making and then setting aside 96% of your pictures, but if you can learn from the bad pictures, don’t repeat the mistakes and figure out how to get better, then it’s part of a learning process. But if you show 60 crappy pictures along with the 40 winners, it’s going to look like you don’t know what you’re doing no matter how awesome the 40 winners are. Bad pictures drag down good ones, NEVER the reverse. Be ruthless, show your best pictures, and put a couple of the bad ones in that month’s Training Ground and we’ll do our best to help.

I do want to address the case of photographers who sell directly to parents/schools/clubs because on the surface the incentives might appear different. While a photographer on an assignment only needs the pictures his/her editor demands, selling directly means that you can’t sell the pictures you delete. But if the goal is getting better, building a reputation, and strengthening your pricing power, then you’re better off not selling a bad picture even if it means passing up the money from time to time. Just because parents are willing to by a bad picture because it’s of their baby, doesn’t mean you need to sell it. Eventually you (or another photographer) will sell them a quality picture and the bad one will look worse in comparison.

Finally, when it comes to your portfolio, you need to be even more ruthless. Lose all the duplicates, lose everything that isn’t the very best you can do at the moment, and yes, lose even the great pictures that don’t fit. Above, I mentioned pictures where the backstory mattered or where the degree of difficulty is the only great thing about them. Again, I’ll use myself and one of my own pictures as an example: 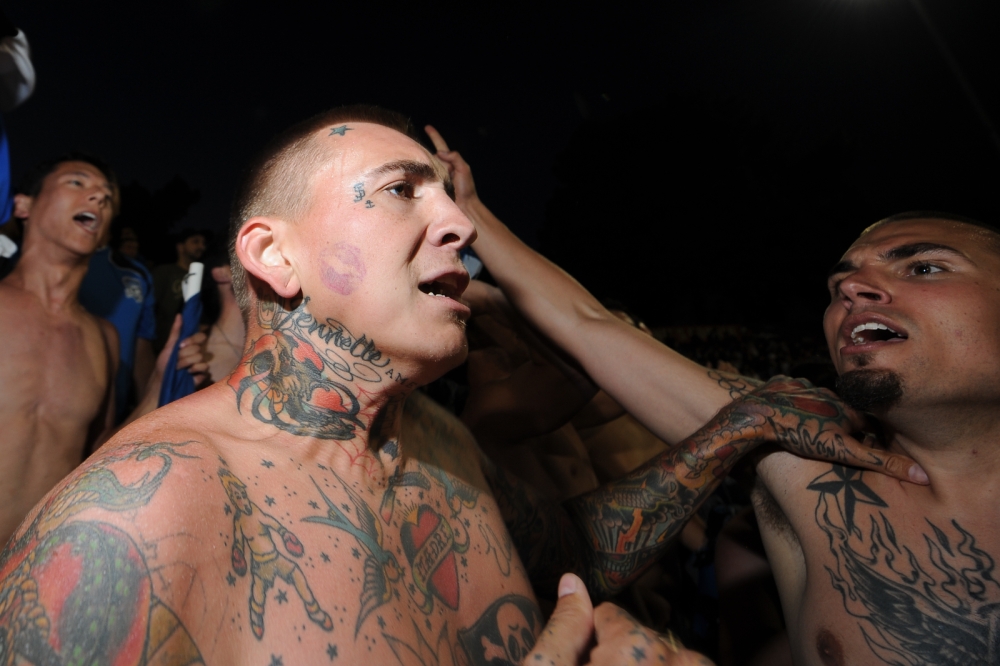 This picture was made at a San Jose Earthquakes match. I left the sideline for a bit and went into the section reserved for the Earthquakes supporters group 1906 Ultras with a wide angle lens and an off camera flash. It was very rowdy, and many of the Ultras are ex-cons, and somehow I managed to get the picture that pretty much nailed what it was like to be in that section that night. I left, thinking that it would go straight into my portfolio. A few days later, I ran it by someone I trust, and the upshot was that as a sports photograph, it was devoid of context, and if you have to read the caption to get it, it doesn’t go into the portfolio.

As a photographer your pictures speak for you. Your editing skills determine which pictures do the talking. If you’re not where you want to be as a photographer or an editor, put pictures into the Training Ground posts, and we’ll set you straight. On the plus side, neither Ryu or I can fire you, but then again we’re not giving away a Cadillac Eldorado or an ancient sharpened knife either.

8 thoughts on “Matt: Always Be Editing – And Edit Ruthlessly”